The Waste and the Collector

The Waste and the Collector

Published on May 8, 2012 by Kenn in Population and Development

Waste is a universal and highly visible phenomenon. The perspectives towards solid waste are often contradictory: While by affluent societies it is often considered plainly as garbage or an environmental problem, inDavaoCityand other cities, it is an important and flexible source of income for the large part of urban population and provides raw material to many sectors of economy. Waste collectors form a vital part of the economy in nearly every city of the developing world.

Operating on the streets, curb-sides and dumps, this group of people collect, sort, clean, recycle and sell material thrown away by others, therefore contributing to public health, sanitation and environmental sustainability. According to estimates, “about 1 per cent of the urban population – at least 15 million people – survive by salvaging recyclables from waste.”

Practical Action are working with some of the poorest communities to safely and securely improve their waste management and collection methods. This brings improvements to the health of the slum dwelling families and the creation of safer healthier places to live and work. 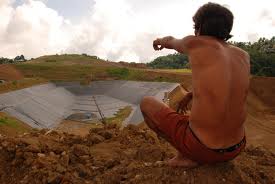 credits to Reid Bacongco for the photo

This Blog is A call for Environmental Awareness in Davao City

LOST IN THE WONDERS OF NATURE'S LABYRINTH