Published on April 1, 2012 by Chelley in environment

Two days ago, Davao City has witnessed and experienced the very exciting EARTH HOUR event. Me and my partner, Kenneth, see to it that we witness the time when the city recognized darkness as a medium of action to help mother earth. The celebration of the event was not only in Magsaysay Park but also in SM City Davao, NCCC Mall Davao and so much more. However, Kenneth and I, we went to Magsaysay park and took part in the lighting and releasing of Sky Lanterns. Booths were set up and lots of people were there to both witness and join an event that would add up to our city’s history.

Unfortunately, the rain poured and like I mentioned in my previous entry, “When it rains in Davao, it rains hard.” For one, I thought me and Kenneth wouldn’t be able to release our lantern and we just thought of releasing it someday in school but the rain stopped and we finally let go of our lantern. One thing that really surprised me was even though it was raining hard at the park, the people waited in the shed until the skies were clear and altogether we let go of our lanterns. It was indeed a sky full of lanterns.

Finishing the half of the program of the Earth Hour at Magsaysay Park, Kenneth and I went on our separate ways and I headed to Matina Town Square. Friends of mine were waiting there and as I was waiting for them, I came across this scene 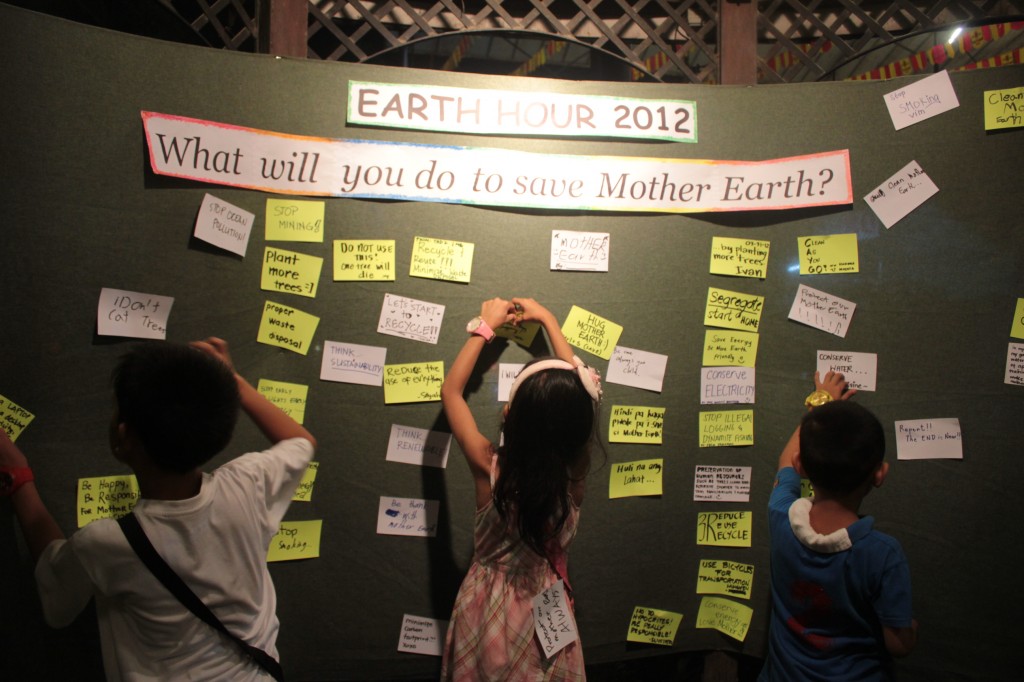 I thought at first that maybe these kids were taking down the notes that people made but to my surprise, they were actually fixing them because the posts were falling apart. I just couldn’t help but pick up my camera, forgot about how drenched I was from my experience at the park and started taking shots. When they noticed that I was taking a picture, they thought I was only interested in the posts and stepped back to my side so I told them that I wanted them to just continue what they were doing and not mind me. So they just did what they were doing. I was really amazed because I thought kids their age, wouldn’t really give a damn about these stuff but instead I witness three kinds picking up fallen promise post its and putting them back to the wall. It was indeed a heartfelt moment and I ended my Earth Hour with the cozy feel in my heart.

Watch out for our little documentary of the releasing of the Sky Lanterns: To be UPLOADED

This Blog is A call for Environmental Awareness in Davao City

LOST IN THE WONDERS OF NATURE'S LABYRINTH