What is (not) good about 7 billion? 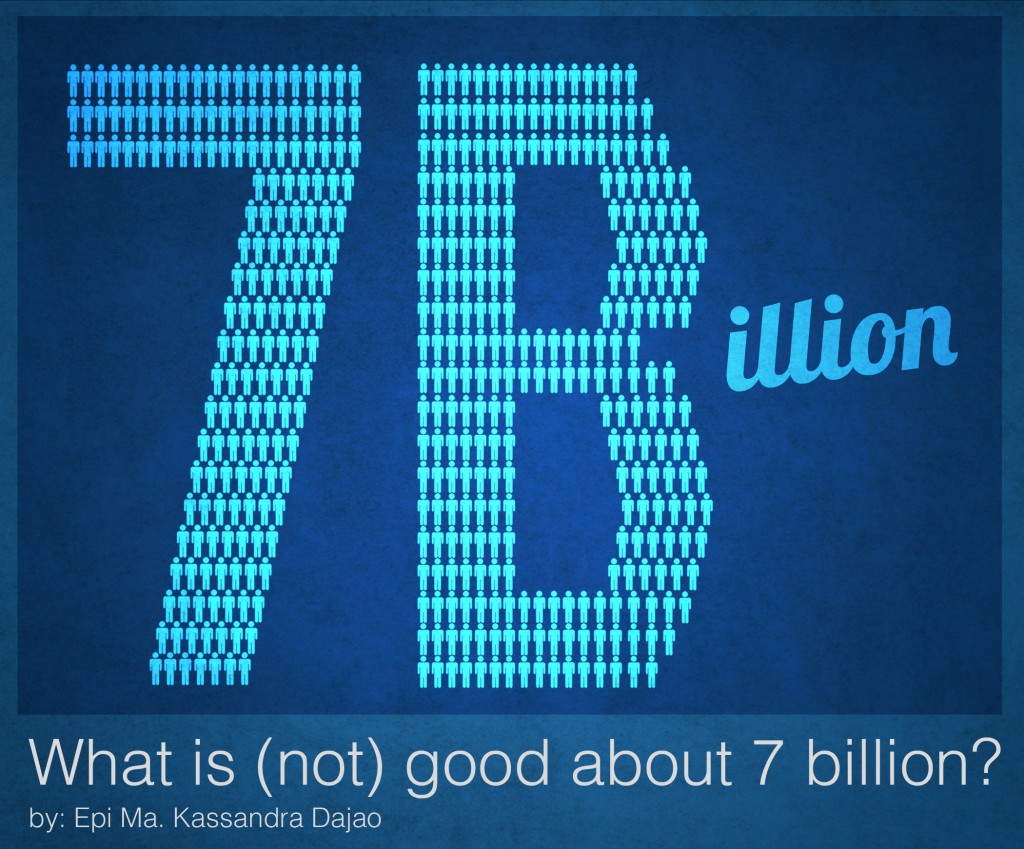 Seven is one lucky number. Count in billions. Isn’t it enormous? What if we reach seven billion as inhabitants of the fragile Earth? Wouldn’t that be alarming?

The birth of the world’s symbolic seven billionth baby is another demographic milestone. Sure Phillippine’s Danica May is one of the luckiest babies Earth today. Her birthday was celebrated with United Nations volunteers, press people and the rest of world. Danica’s timely birth
last October 31 gave her family an overwhelming prize, sufficient enough to start up a family business. She is one lucky Filipino, isn’t she? What do we think?

She, as well as her counterparts in Ankara, Basrah, Karachi, Dubai, New Delhi and Baghdad, is incidentally famous. Where does she owe her fate? To the heavens and to the United Nations, of course. Well, at least, young as she is, she’s able to give her parents pride, and of course, some little perks. There’s nothing much to worry about her future; she’ll surely make it. After all, she’s the world’s seven billionth baby. What else to ask for?

Danica’s birth, if I may say it right, is a side issue. What could be the implication of having seven billion humans on Earth is the pressing problem. Seven billion people are growing exponentially over the years and living on the spherical planet Earth. Should this scenario continue up to 2025, scarcity would be a famous word around the globe. There would be shortage, and never-ending shortage of anything, from merely a small piece of grain up to the last drop of water from the faucet. Shortage would wage war among nations, as what most economists say. Of course, we don’t want to experience such horror. Even so, I believe that the war on resources has started in this era already. It is unforgiveable but yes, it has become a cause for waging war. The war we see in the Middle East and in other oil-rich countries today, isn’t it a war for control of resources? I won’t believe they fight and spend millions of money solely for religious conflicts and clashing ideologies. There is more than just gods and glory in a fight. Perhaps, GOLD. History proves it.

Now, talking about the high population growth in the Philippines, statistics shows we are less populated that the other countries in the world today. But mind you, we are moving up to the 12th in the rank on the list of the most populous countries in the world; India and China as the top two according to the United Nations Population Fund. We rank second largest in population next to Indonesia in Southeast Asia region. Ergo, we cannot afford to multiply over time without ensuring food security, and the rest of the requisite services of for the human population. We cannot be just another third-world country relying mostly on the first-world countries’ financial aid. Philippines should continue to grow with its people. Population has to be equated with economic growth. Sure, we won’t have any problem so long as the Philippine economy grows with its population. Population growth should not (never) outpace economic development.

So as we celebrate with the parents of the seven billionth baby on earth, we cannot say we’re totally happy about it despite our belief that babies are gifts of heaven. Figures would tell us, we might have a problem in the near future (had the economists calculated it right). The six billionth baby was born in 1999, that was only 12 years ago. In brief, the world’s population hit another billion in just a short period of time. Granting that all factors remain constant, Philippine health officials believe that it would take only 11 more years for us to reach another billion. So, we should be ready to welcome the eight billionth human being shortly after a decade or so. Reports say, we hit one billion in 1804. In no less than a hundred year later, it doubled to two billion. But, in 1974, only 47 years after, the population rapidly increased to four billion. If this trend continues, we can only expect rapid population growth in the coming years. The question is: Are we ready for population boom?

What United Nations Resident Coordinator Jacqueline Badcock actually suggests, written in recent reports, is for the country to utilize its resources well so it can manage a large population. She says, “Well, the thing is whether you have a large number or a small number, you need to provide services for your population, and you need to provide the services you need to live a productive life.”

What is not good about seven billion?

There isn’t wrong about having seven billion people, except that this may mean more people residing under the wide bridges in the metropolis, more children staving off hunger with sweet candy treats, rugby and solvent. There isn’t wrong about seven billion more people on earth for as long as there is enough resources for everyone, enough working opportunities for all, and sufficient income to feed the family. No more questions asked.