WHEN CAN TRASH BINS EAT YOUR RESUME 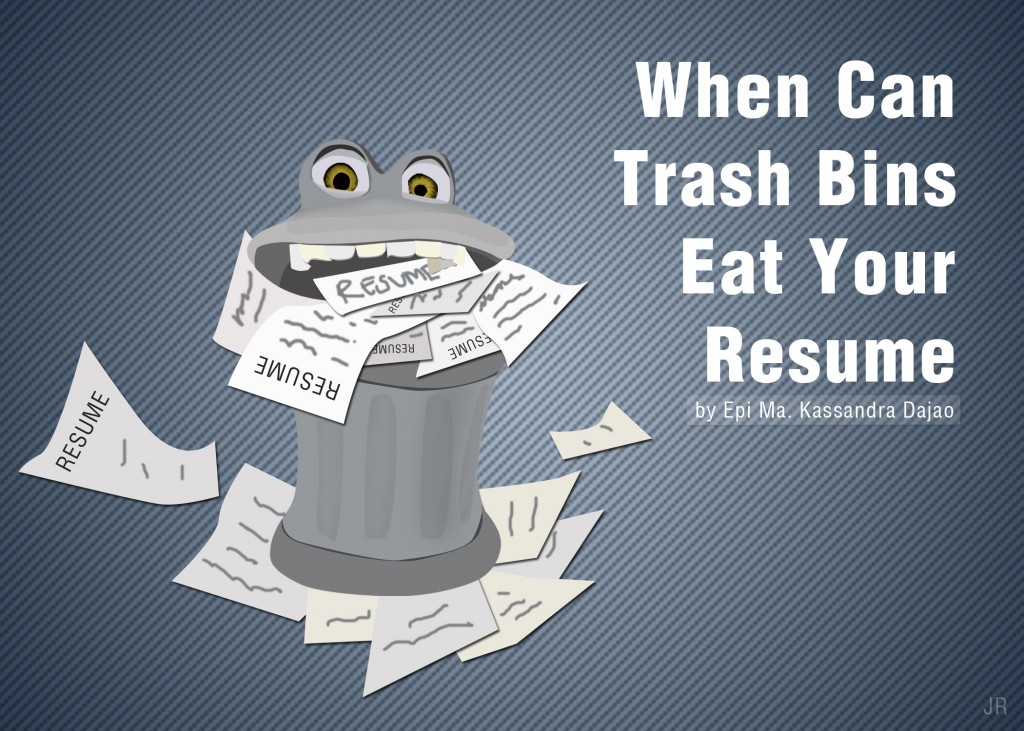 Yes. Trash cans do eat really bad resumes. Some resumes can be too dreadful that even trash cans refuse to swallow it. Irritated and disinterested hiring agents often get resumes thrown into trash baskets and then they would look for other well-written resumes out of the pool of papers they have. Crumpling your three-page resume may not really be a big deal for them, if it doesn’t make sense or if they see errors all over your paper.

Sure you don’t want your money, time and effort wasted. Sure you have hit the backspace key of your computer hundred times before having the final one. For sure, you have considered changing your 2 x 2 photo so it would look more pleasing. Definitely, you have spent money for papers and envelops. And, you don’t want your resources put into nothing.

So, here’s for you if you don’t want your treasured resume to sleep with candy wrappers, styro cups, rat and cockroach. 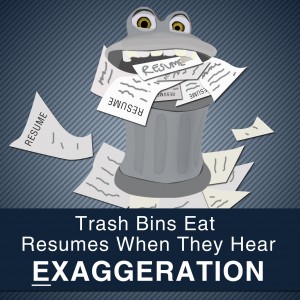 Most of us don’t like talking to guys with so much to say but have less to show, do we? We play deaf when we hear people playing with hyperbole. Who wants to listen to twaddle and hundred lies anyways?

David King in his published book, “How to Win the Job You Want” in 2002 identifies exaggeration as of the important points to avoid in resume writing. He says: “Don’t pretend to be more than who you really are. Don’t write such superlatives like ‘hardworking, dynamic and constantly motivated’ unless you know you really are one.”

It’s important to reflect who you are in your resume. Flaunt what you really have but don’t go overboard. Sell yourself not with false information but with what you are and what you can really do. 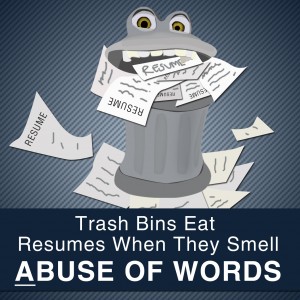 “Consistently assisted the company manager in different activities and responsibilities entailing accomplishment of monthly reports and statement of accounts, follow up meetings with the clients, conceptualization of vital correspondence and other pertinent tasks assigned.”

This may drown your reader.

Don’t get too overwhelmed by words and phrases. Let them work for you instead. Choose words that are powerful says Nikki Constantino, writer of Girlfriend Magazine in her article How to write a resume that’s sure to get you hired. She writes, “…use the most active impressive and accurate verb you can think of.”

Like in journalism, economy of words is important. Your readers may not have much time to read your long and wordy sentences. David King suggests: “Don’t make your work experience too wordy and detailed if you want yourself to get hired.

So, if you don’t want to get jailed, avoid abusing words. They can sue and curse you if they want to. Beware. 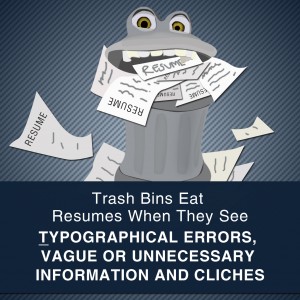 Typographical errors are sometimes forgivable; oftentimes they are not. Vague information is plain confusing. Cliches or overused expressions, just put them aside.

King (2002) stresses about the importance of an error-free resume. Most employers note even minor errors. “Even simple mistakes such as typos, misspellings and grammatical mistakes are noted by the employer. For instance, how do you think your interviewer would feel if you’re applying as a technical writer and you don’t know the difference in using it’s and its?” (King, 2002).

If errors are unforgiveable, so are the vague and unnecessary information in the resumes. Avoid causing your would-be employers headaches for the effort they have to put in just to understand (and even analyze, should they want to waste time in your resume) what you really mean. You don’t want to see their sour looks to your paper as they toss it aside. And then, it’s completely forgotten, rotten.  So, David King says avoid writing down unclear information that would puzzle your readers’ minds.  Don’t write G.R.O when you mean Guidance and Relations Officer if you don’t want misunderstandings.

When you submit your resume, think that your evaluator may have read thousands of resumes reading yours. They may be tired of the phrases ‘good moral character’, ‘excellent working skills’, ‘good English skills’. These are worn-out statements that were used by thousands of people for a thousand times in their lifetimes so get rid of them. (Please!) Kill those overused statements when you can; they’re too old to be in your resume. Also, avoid phrases that sound like you want to sweep Miss Universe’s crown.

Three EAT tips for you to avoid getting eaten by the trash can. Digest them fully, leave it in your heart and get hired.

Your Two-Page Paper – Make It Work

Want three stars for your resume? Make it four.

Here are some friendly tips that stick on your fingertips.

Ideally, your resume should not exceed two pages but if there are necessary details you need to include, three pages can work; four is lengthy enough; five is too much. David King says limit your resume to one to two pages; use three pages only when necessary.

How would you make your resume shorter? Summarize the information you need to include. Choose the ones which are significant and relevant to the position you are applying for. Leave your achievements during nursery and kindergarten behind. They don’t really count.

Nikki Constantino in Girlfriend Magazine May 2007 edition writes “How to write a resume that’s sure to get you hired”, Tips from Mar Anne Felipe, hum an resources director for Mega Publishing Group. She says “From the readers’ perspectives, shorter is usually the better. But there really is no fast rule.” According to the write up, resumes can be 10-20 pages so long as you can keep your readers’ interests and excite them until they dial your digits on their phones to call you for an interview. So, make your resume shorter unless you have a wide variety of special achievements and skills to sell.

Details may bore readers. “Leave them wanting for more. Remember this is an ad to market you, not your life history,” she adds.

Keep it clean, neat and presentable. Do not submit a paper that would only highlight how bad you are in organizing things. It would not help you land on the job you want.

Start with your stationery. Creases may be noted by your employers. They may take note of the folds, smudges, erasures and stains on your paper. It makes a bad impression.

Next step is your photo. HR Director Anne Felipe of Mega Publishing Group suggests that photos should “exude professional look.” It simply means that you have to show that you are groomed in your photo, so wear something decent. Photos can be enhanced but not to the extent that it looks like a different person. It should also be recent photo of you.

Another thing is the layout. Constantino writes: “Usually, experience sections should come first before education. This is because more qualifications are developed from experience than from education.” According to the write up, exceptions would be if you have just received your degree; this proves that your education is a stronger point than your work experience. Also, you can put emphasis on your advancement in your field, for instance, if you have just completed your MBA degree.

Use words to flaunt. Words have power. They can make your resumes extra appealing and interesting. Use active verbs. Constantino writes: “For every skill, accomplishment or job described use the most active and impressive, accurate verb you can think of. Eg., lead, directed, headed, managed, engineered, generated.”

Also, highlight what you can do; what are the unique things you can do aside from eating fire while stepping intermittently on the burning charcoal. Felipe says, “But one important development in resume writing is the inclusion of objective and summary of qualifications and skills. If done well, these can be very powerful tools to develop an immediate psychological response from the mind of the reader.” The suggestion, according to Felipe, would also be helpful for those who are making a career change or have a limited work history. “By putting these things on the first part of your resume, you can immediately direct your employer’s focus on where are you going, rather than where you have been,” says Felipe.